​MIND, Guernsey - www.guernseymind.org.gg
Their goal is to promote positive mental health for the community by campaigning locally to improve services, raise awareness and encourage understanding.
​
Male Uprising Guernsey (MUG) - www.mug.gg
The focus of Male Uprising Guernsey (MUG) is to increase awareness and promote education around the symptoms and treatment of prostate, bowel and testicular cancers. Funds raised are also used to improve the diagnosis and care of local men suffering with male cancers.

﻿This year’s Harbour Carnival will have The Guernsey Voluntary Service as its main beneficiary, after a charity call-out from the organisers, the Guernsey Round Table.

The Guernsey Voluntary Service provides support to elderley in the community through social clubs, the meals on wheels service and trolley shops.


Mike Ozanne from the Round Table, said: ‘This year we received a significant number of applications for the role of main beneficiary and we felt this one stood out for the unsung work they do in the community.' 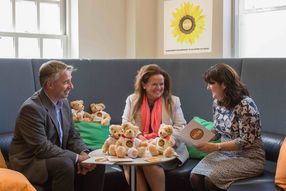 ﻿This year’s Harbour Carnival will have The HUB’s Sunflower Project as its main beneficiary, after a charity call-out from the organisers, the Guernsey Round Table.

The Sunflower Project provides emotional support to children who have experienced bereavement or a serious illness in the family. In the last year alone, the Project has helped over 50 children by providing tools and resources designed to help then with their grief.

Denise Ozanne, Project Worker at The HUB said: ‘We’re thrilled to have been chosen as the main beneficiary of this year’s Harbour Carnival. The funds will enable us to continue offering bereavement support to young people. In the last year alone, we’ve seen a 75% increase in the number of one-to-one sessions provided to young people. We also run group sessions and we know from feedback we’ve received, the profound effect taking part in the Sunflower Project has had on those who have used its services.’

Gary Naftel from the Round Table, said: ‘We received a number of beneficiary applications and considered each individual one on its own merit. However, The HUB’s Sunflower Project presented a particularly strong case and there was a unanimous decision by Round Table and our event sponsor RBC Wealth Management to support the Project through this year’s Harbour Carnival. The HUB has very kindly offered to help with volunteers both in the lead up to the event and on the night of 11 August, for which we are extremely grateful.’

Lisa Barnett from the Guernsey Leadership Team of long term sponsors RBC Wealth Management said: ‘We’re celebrating 10 years of sponsoring Harbour Carnival this year and are particularly pleased that this year’s event will provide funds for a local good cause helping the island’s youth. This is one of RBC’s key areas of community support and we are delighted the excellent reputation of The HUB’s Sunflower Project will continue to make a meaningful difference to young lives.’ 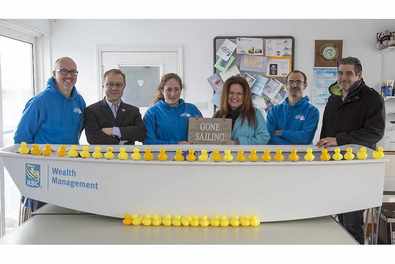 The main beneficiary for this year’s Harbour Carnival has been announced as the Guernsey Sailing Trust. Organised each year by the Guernsey Round Table and sponsored by RBC Wealth Management, this year’s Harbour Carnival will take place on Friday 22 July. Of the monies raised, 50% will go to the Trust, with the remaining 50% being divided between a range of good causes throughout the year.
Established in 1988, the Guernsey Sailing Trust’s aim is to provide a safe and fun environment, for children of all abilities to learn to sail. It provides term time sailing opportunities to all of the island’s schools. During the school holidays it also runs a number of sailing courses.
Carl Tanguy, General Manager of Guernsey Sailing Trust said: "Like any charity, we are reliant on goodwill for our continued operation, so to receive the support of Harbour Carnival will be a major boost to our funds this year. The building from which the Trust operates is in need of repair. In particular, we’d like to make repairs and enhancements to the building, allowing us to provide wheelchair access for our less able sailors.
"We have a plaque on the building from 1998 which commemorates funds received from RBC Wealth Management to help with the building and more recently it’s helped us with the purchase of new sails. It’s fitting that with its involvement in Harbour Carnival, its support of the Guernsey Sailing Trust will continue."
Bruce Watterson, President of the Guernsey Round Table added: "What a great fit we have this year, with both the Harbour Carnival and the Guernsey Sailing Trust active in and around the water.  We’re all busy planning for another great event, including some new additions to Carnival which we’ll be announcing shortly."
Lisa Barnett, of long-term sponsors RBC Wealth Management, concluded: "RBC Wealth Management is particularly keen to show its support for charities working with young people and those with disabilities. The Guernsey Sailing Trust does a wonderful job of providing a safe and nurturing environment to our Island’s young sailors. We’re delighted to continue our support of such a worthwhile charity and as a company, we’ll be playing our part, both in and out of the water, to help raise a significant sum for them."
re to edit. 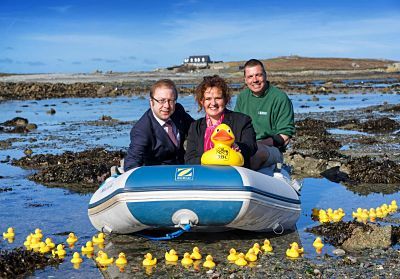 Lihou Charitable Trust will be this year’s main beneficiary of the Harbour Carnival and it will be a double anniversary celebration. The organisers, the Guernsey Round Table, will be celebrating its 65th anniversary in Guernsey and Lihou Charitable Trust will celebrate 10 years since its formation.Sponsored for the eighth year by RBC Wealth Management, this year’s Harbour Carnival will take place at the earlier date of Friday 19 June.

Since taking over the lease of the house on Lihou Island, the Lihou Charitable Trust has seen a year-on-year increase in the numbers of people staying in the house. While day-to-day operating costs are largely covered through the charge for using the house, all improvements and infrastructure expenditures have to be achieved through fund raising.

Richard Curtis, Warden of Lihou Charitable Trust said: "The Lihou Charitable Trust continuously aims to improve the facilities within Lihou House, to offer the best experience to both old and young alike. Young people are the focus of the Trust and the funds raised from this year’s Harbour Carnival will go towards improving the three bathroom facilities, making them more appropriate for school and youth group use.

"We rely heavily on fundraising for such ventures, which allows us to maintain the lowest possible charge for the hire of the house, making it affordable and available to all. In the ten years since we took over the running of the house, nearly 18,500 people have stayed in it, with 59% of those being young people. We’re delighted to be a part of this year’s Harbour Carnival and look forward to helping in the run up to it and on the night."

Bruce Watterson of the Guernsey Round Table said: "When selecting the main beneficiary for Harbour Carnival, we always bear in mind whether the good cause is Guernsey based, if the funds will stay here and what benefit the funds will provide to the wider community. As custodians of one of Guernsey’s few nature reserves, the Lihou Charitable Trust ticked all those boxes and presented a very strong case for support in its tenth anniversary year."

Lisa Barnett from RBC Wealth Management said: "Having stayed in Lihou House myself I know what a magical experience it is. As a company, we are delighted that the funds will be going to upgrade such an iconic building which has been pivotal in providing the Island’s school children with what is often their first night away from home in a safe and educational environment. With everyone’s support, we look forward to raising a substantial amount for the necessary renovations to the house at this year’s Harbour Carnival." 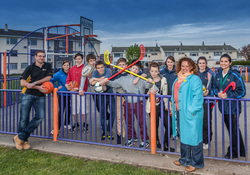 Preparation for the 2014 Harbour Carnival is well underway, and the main beneficiary of this year’s event has been announced as the Guernsey Sports Commission (GSC).

Organised by the Round Table and sponsored by RBC Wealth Management, the Harbour Carnival will take place on 29 August 2014.


As the main beneficiary, the GSC plans to dedicate most of the donated funds to their Street Sports programme, which offers 11-18 year olds the chance to try out a range of sports for free, in the evenings, at a number of locations across the Island.


Shirley Ann Parker, Street Sports Leader and Coordinator said: ‘We’re beyond thrilled that the Guernsey Sports Commission will be the main benefactor of this year’s Harbour Carnival.

Young people had the opportunity to play a range of sports including cricket, basketball, dodgeball, badminton, rounders, volleyball, hockey and football.

Guernsey's sea cadets will benefit from the 2013 harbour carnival in August.

The event raised £24,000 in 2012 and one of the event organisers, Michael Ozanne, said he hoped to match that amount.

He said the sea cadets would get 50% of the total amount raised, with the rest going to a range of other local charities.

The Sea Cadets is open to people aged 12-18 and introduces them to skills including sailing and rock climbing.

Paul Mooney, commanding officer of the Guernsey Sea Cadets, said: "The money raised should enable us to purchase a new Trinity 500 boat, allowing cadets to gain boating qualifications that complement those earned during the winter months.

"Any left-over funds will go towards renting a new headquarters as we are currently based in the Sydney Vane House in Admiral Park, which is due to be redeveloped."

The Harbour Carnival is organised by the Guernsey Round Table and sponsored by RBC Wealth Management. 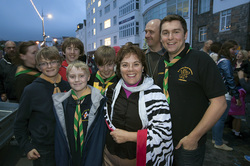 The Bailiwick of Guernsey Scouts Association are in line for £12,000 because the 2012 St Peter Port Harbour Carnival raised a record-breaking amount.
The event, held on Friday 6 July, raised a total of £24,000, helped by a rain-free evening, and new events such as the corporate duck race. The remaining 50% of the amount raised will go towards other local good causes.
The Scouts were chosen as the main beneficiaries by Harbour Carnival organisers the Guernsey Round Table and sponsorsRBC Wealth Management.
Julie Bulpitt, Bailiwick Commissioner of the Guernsey Scouts Association could not be more delighted with the amount they will receive.

She said “it’s been a packed few months since we heard in May 2012 that we had been selected as the main beneficiary. We have been busy selling the mini ducks and building rafts to enter the various races and we helped out on the night.”

“We even had Guernsey Cub Scout Leader, Deputy Michelle Le Clerc entering in the man-powered flight race. Who knew fund-raising could be so much fun!”